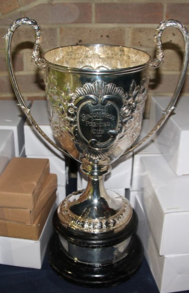 Barkingside will play FC Leytonstone at Dagenham & Redbridge on Tuesday 24 May (KO 19:45)

What a season this has turned out to be for Barkingside Sunday. Still in with a shout of landing the Senior Division title, and just weeks after landing the Charlie White Cup, today they saw off a spirited fight from Weare Utd to triumph after the additional period.

In what should have been a highly decorative history within the Combination, they now have the chance to land the ones that matter the most. Perseverance is the key &  all eyes will now focus on the Chigwell Construction Stadium to see if Franco and his merry men can add to the cabinet.

FC Leytonstone, the opposition in the Premier Cup Final, put themselves into pole position in the challenge for the Division One title, and promotion to the top flight. A big 3-2 win over an impressive Flamengo side sees them within a point of FIFE, but games in hand.

Rainham also grabbed the plaudits following a terrific 2-1 win over high-flying Newbury Forest. Such is the quality in this division, that such results should never be underestimated.

South Ilford gained a 4-1 win over Warren and both sides will be keen to improve over the summer and seek better rewards for their efforts.

Bretons Manor vs Debden Sports ‘A’