After chasing the elusive gong for a several years, Barkingside finally got it over the line, clinching the title with a crushing victory over the only team that could have stopped them this season, JK Silvertown.

In what will go down as one of the most disappointing campaigns, having a few sides not go the distance, maintaining a consistent challenge proved beyond all but one side. The league salutes Barkingside in pulling off a string of impressive wins that sees Francesco lift the trophy for 2021-22

As the crowd settled in the Redbridge sunshine and watched Bretons Manor jump out to a four goal lead, many will be forgiven for thinking this would be one-way traffic. But the truth is, Cardinals had carved out some chances but never really enjoyed the same luck in the final third.

With 76 mins played it was Cardinals 0, Bretons Manor 4. Just 14 minutes later, Danny Acquaye had re-written the history books with an astonishing four goal blast to equalise with virtually the last kick of the game. 4-4 at Full Time. Fantastic stuff.

To be honest, extra time had a red card which ultimately cost Cardinals any chance of success but was largely all about Bretons taking advantage of the extra man, which they duly did.

Sam Cooper completed his hat-trick and the final score was Cardinals Athletic 4, Bretons Manor 6. Arguably, the best team on the day lifted the trophy, but what a challenge the underdog Cardinals put up. The league is very proud of the efforts of both teams who emerge with a lot of credit each. 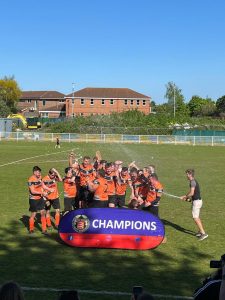